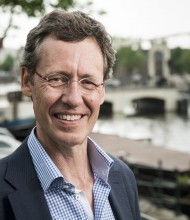 Robert J. de Boer MSc PhD (1965) was trained as an aerospace engineer at Delft University of Technology. He majored in man-machine systems and graduated cum laude in 1988 on the thresholds of the vestibular organ. After gaining experience in line management and consulting he joined Fokker Technologies in 1999. Here he was asked to develop the Program Management methodology for Fokker in compliance with aerospace requirements, as a prerequisite for Fokker to participate on the A380 program. This led to the appointment as the Director of Engineering in 2002. In this role he supported and guided an increasing number of engineers (up to 300) occupied in a large number of new design projects across the globe.

These experiences inspired his current scientific interest in team collaboration and safety, culminating in a PhD (achieved in May 2012) at the Delft University of Technology. From 2009 to 2018 Robert was appointed as Professor of Aviation Engineering at the Amsterdam University of Applied Science (AUAS). In this role he executed research in the field of aviation, with a focus on Human Factors & safety, maintenance process improvement and condition monitoring. Robert is currently the Director of the Amsterdam Campus for Northumbria University, combining this with safety research and a role as Associate at INTERGO (the International Centre for Safety, Ergonomics & Human Factors) in the Netherlands. Robert has supported the improvement of safety at many organisations across the globe such as OKG (nuclear, Sweden), Mersey Care NHS Foundation Trust (health care, UK), Shell, BP, ExxonMobile, Neptune (oil & gas industry, global), Luton Airport, Lufthansa Technic, Thai Airways International, KLM, EASA, TUI aviation, the Dutch armed forces, Dutch railways, and the Dutch road authority.